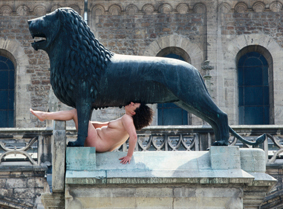 The performance “ LION “ is based on the legendary story of Romulus and Remus, two brothers who were nursed by a female wolf. When they were grown up, the twins laid the foundation stone of Rome, the capital of the former powerful Roman Empire. For this reason a monument was built to commemorate the twins as well as the foundation of the city. My aim is to arouse some questions: which role do these heroic sculptures in public space play in our current time? This sculpture is the first monumental Sculptur beside the Alps in Europe.